The wildcat was widespread until 1850 in the eastern half of Austria. Data and reference samples testify to autochthonous populations and their gradual extinction in the second half of the 19th century. In Lower Austria, in the second half of the 19th century there were still scattered wildcat populations on the edges of the Vienna Woods and the connected mountain areas of Gutenstein and Türnitz, and in the southern part of the Weinviertel Klippen Zone of Waschberg and Bisamberg up to the forests of Ernstbrunn. After the last captures in 1902 in Strasshof near the Northern Railway, in the winters of 1902/03 at Bisamberg and in 1909/10 by Niederkreuzstetten as well as in 1912 in Wassertal south of Lilienfeld, no further appearances could be confirmed.

Until after World War II, there were still occurrences in Carinthia and South Tyrol that were linked to the population in Slovenia. Many sporadic observations have been made in the Wald and Mühlviertel since the 70s, eg Dieter Manhart's sighting in 2003. However, these were classified as loners. A few of them presumably involved migrations of animals that had been reintroduced into the forests of Bavaria or Bohemia.

The last unequivocal evidence of wildcats points to their endangerment. On the 21st of September 1996, a male wildcat was shot near Grafenstein in Carinthia at the edge of a corn field. On the 22nd of January 2006, near Feistritz an der Gail (also in Carinthia), a two- to three-year-old wildcat was run over by a car. This male wildcat was associated with the Italian population. In the late autumn of 2008, a hunter confused a wildcat in Styria with a domestic cat. The cat was a fatality of this mistake.

Evaluation of the status of the wildcat

The book on mammals by Friederike Spitzenberger offers a good overview of the situation of the wildcat. Summing up, Kurt Bauer evaluates the status of the wildcat as follows:
"In Austria nowadays, the wildcat counts as a rare guest which, since its reappearance after the extinction of the last autochthonous marginal populations (1997), is caught or observed about five times every ten years.
As a comparison […] shows, the appearances in the last decades happen largely in landscapes in which the species had survived the longest - the Basin of Klagenfurt and the edge of the bay of Graz, the thermal line, copses and rocky landscapes in the Weinviertel and on the border of the Waldviertel granite plateau and the foothills of the Böhmenwald and Sauwald.”

Friederike Spitzenberger reaches the same conclusion in her contribution to the Red List of endangered species in Austria:
"Status of the wildcat, Felis silvestris: Regionally extinct. Species no longer extant in Austria. The population has been verifiably eradicated or has died out (i.e. there are good reasons to believe that their populations are extinct). After the 1950s, as the autochthonous breeding stock died out in Austria, there have only been sporadic and localized reports that probably refer to migrated animals from neighboring populations. There is currently no sign of a resident reproducing population in Austria. As in the case of the lynx, there is a lack of biological investigations into the wildcat in Austria. It would be highly desirable to introduce a wildlife conservation program based on the results of such biological examinations in some of Austria's neighboring countries, in view of the sound level of knowledge and satisfying conservation status there.”
BAUER, K. (2001): Wildcat Felis silvestris SCHREBER, 1775. - In: Spitrenberger F. (ed.) (2001):
Mammal fauna in Austria. - Grüne Reihe of the BMLFUW, 13: 665 - 671, Vienna.

However, reports of wildcat sightings have also been increasing in number over the last few years. The accumulation of individual evidence south of the Danube and the current evidence in the National Park Thayatal reinforce the hope for a comeback of wildcats in Austria. 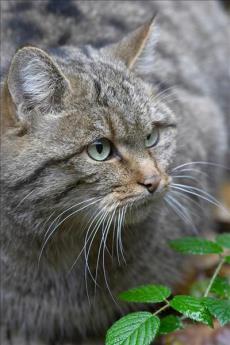